Off-grid system for a water pumping station in Colombia

The water distribution system of the Colombian town Rubiales in the Meta department was previously using a diesel generator for its pumping station. As both fuel and maintenance of a diesel generator is expensive, they were looking for a renewable energy system to replace it completely. In Colombia hydropower accounts for about two thirds of the generation capacity (2016).

A solar system to supply water to an entire village

This is a complete off-grid system for a pumping station with two submerged pumps. One pump draws water from an 80m deep well into an 80m3 water storage tank.  The second pump is transferring water from that tank to a 50m3 storage tank in a water tower located 60 m above ground.  The water then flows by gravity to the town users, about 100 homes.

The solar system is composed of a 54 kWp solar field, four 48V battery banks each of 2405Ah C-100, nine solar charge controllers in parallel and three inverter/chargers in a 3-phase system configuration. 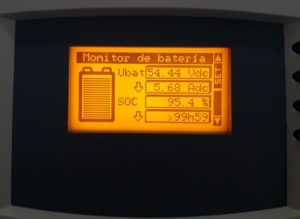 How about the project?

The habitants of the Rubiales town is now solely using solar power for their local aqueduct. As additional benefits, its operation is silent and there is no pollution.

Replacing the existing diesel generator with an off-grid system to power the pumping station was not only a technical challenge but it also meant a reorganisation of the pumping stations running times in order to make the system efficient. The pumps are still running 9 hours per day; however, they start a few hours later in order to fully benefit from the power generation close to midday when the sun is at its peak. In the beginning, this change was difficult for the people as they were used to having the water supply already at five o’clock in the morning.
Currently some users do not have water tanks, meters or valves to close the pipes and the clear water waste is big, approximately 30% of the water supply. If they would put in valves to close the pipes and save the water the need for pumping hours would decrease, the availability to water be extended and they could supply water to new users.

Latin America, offgrid, variostring, xtender
Grid independent residential area in Johannesburg
Ecofriendly and autonomous atmospheric water plant
We use cookies on our website to give you the most relevant experience by remembering your preferences and repeat visits. By clicking “Accept All”, you consent to the use of ALL the cookies.
Read More Reject All Accept All
Manage consent